6.13.2 The languages in India come from many different language groups. Apart from the major languages belonging to the Indo-Aryan group, spoken by 75% of the population, and the Dravidian group, spoken by an additional 20%, there are other languages spoken in India which belong to the Austro-Asiatic, Sino-Tibetan, other minor language groups such as Tai-Kadai and Great Andamanese, as well as isolates. More than three millennia of language contact has led to significant mutual influence among the four predominant language families in mainland India and South Asia.

6.13.3 Hindi is the most prominent and wide-spread language in India. It is spoken by over 40 crore people (2001 Census) and serves as the lingua franca across much of North and Central India. The number of native Hindi speakers is around 25% of the population. However, when other dialects of Hindi spoken in the Hindi belt, such as Braj Bhasha, Haryanvi, Bundeli, Kannauji, Hindustani, Awadhi, Bagheli and Chhattisgarhi, are taken into account, more than 40% of the population speaks the Hindi language.

6.13.4 Article 343 (1) of the Constitution designates Hindi written in the Devanagari script as the official language of the Union. However, Article 343 (2) and the Official Languages Act of 1963 allow for the continuation of English in official work.

6.13.5 The Constitution makes special provision for the propagation of Hindi as the official language of the Union. Article 351 states: “It shall be the duty of the Union to promote the spread of the Hindi language, to develop it so that it may serve as a medium of expression for all the elements of the composite culture of India and to secure its enrichment by assimilating without interfering with its genius, the forms, style and expressions used in Hindustani and in the other languages of India specified in the Eighth Schedule, and by drawing, wherever necessary or desirable, for its vocabulary, primarily on Sanskrit and secondarily on other languages.”

6.13.6 In addition the Constitution recognises a number of official regional languages which are listed in the Eighth Schedule, as amended by the 21st, 71st and 92nd Amendment Acts. The Eighth Schedule currently lists 22 such languages, including Hindi.

6.13.10 Under the TLF, every child is expected to learn three languages, namely, the mother-tongue, Hindi and English. In Hindi speaking States, children are to be taught Hindi, English and one of the Modern Indian languages.

6.13.11 Not all States are providing education in three languages up to the secondary stage; in fact the variations in so many states, as well as local variations within states are of such nature that it can be even argued that the TLF is observed more in the breach than as a national policy. In some States, only two languages, the State language and English are being taught, presumably for political reasons. In some of the Hindi-speaking States the TLF is often interpreted as providing for the study of Sanskrit in place of any other modern Indian language; indeed contrary to the spirit of TLF no South Indian language is generally taught in most schools in Hindi speaking states. Some Boards of School Education allow students to pass the secondary school examination with only English and another foreign language, permitting them even to avoid learning Hindi or any regional language.

6.13.12 Children are born with an innate language faculty. Most children are able to pick up and internalise the complex rules of one or more languages even before they start their schooling. In many cases, children come to school with the ability to use two or three languages both accurately and appropriately. Even differently-abled children who do not use the spoken language develop equally complex alternative sign and symbol systems for expression and communication with ease and facility.

6.13.13 In implementing a language policy, primacy should be given to the mother tongue as the medium of instruction in the initial stages, before the child enters primary school. This is imperative, as repeated studies have indicated that basic concepts of language and arithmetic are best learnt in one’s mother tongue. Indeed, a child learns the mother tongue naturally from her home and societal environment. At the pre-primary level and in Anganwadis, the emphasis should be on reinforcing this knowledge and establishing a sound foundation for all future education based on the children’s mother tongue, including tribal languages.

6.13.14 Hindi and/or English could be introduced as languages right from Class 1, preferably only one of these, when the child begins regular school at the age of six. Proficiency in these languages, besides the mother-tongue, will empower the child in due course to communicate outside her own language group for practical purposes like business, tourism, cultural exchange, administration and social work.

6.13.15 While the mother tongue can continue to be the medium of instruction, the study of Hindi is desirable to bring all Indians together as citizens of a single nation. The study of English is equally of importance to enable her to transcend geographical boundaries and function effectively at the national and international level.

6.13.16 For many Indian families, including those in rural areas, acquiring a degree of proficiency in English is an aspirational goal. This is a major reason why parents prefer to send their children to private schools offering English language courses. English is also the predominant language of the internet. These are compelling reasons for the teaching of English in Government schools. Stress should be laid on promoting conversational English and Hindi, so that the child feels comfortable in using these languages in everyday life. Indeed the early teaching of additional language should be conversational based, rather than regress grammar/syntax-based, which often makes learning a language so complicated and difficult at an early age.

6.13.17 Suitable courses in Hindi and English should also be available in universities and colleges with a view to improving the proficiency of students in these languages up to the prescribed university standards.

6.13.18 The Committee agrees with the view expressed in the 1968 NPE that: “The energetic development of Indian languages and literature is a sine qua non for educational and cultural development. Unless this is done, the creative energies of the people will not be released, standards of education will not improve, knowledge will not spread to the people, and the gulf between the intelligentsia and the masses will remain, if not widen further.”

6.13.19 The study of Sanskrit requires special emphasis, as it is still inextricably linked with the life, rituals, ceremonies and festivals of the people and is a window to the rich cultural, philosophical, artistic and scientific heritage of India. Knowledge of Sanskrit is a window to languages and cultures in many states.

6.13.20 Keeping in view the special importance of Sanskrit to the growth and development of Indian languages and its unique contribution to the cultural unity of the country, facilities for teaching Sanskrit at the school and university stages should be offered on a more liberal scale.
6.13.21 In some States, Sanskrit is already being taught as a compulsory subject from Classes 6 to 8. Sanskrit may be introduced as an independent subject at a suitable point of the primary or the upper primary stage. At the secondary stage, Sanskrit may be offered as an additional option and at the higher secondary stage suitable elective courses in Sanskrit may be made available to all those students who wish to study it. Open school courses for Sanskrit may also be designed for learners at all levels.

6.13.22 In designing Sanskrit courses and curriculum, the language should not be treated as a ‘classical’ language but as a living phenomenon which is still relevant to the general life needs of the people of India. Old timers would remember that teaching of Sanskrit through the Bhandarkar method puts off many students, arising from the undue early stress on grammatical perfection, rather than provide the ability to get a feel for the language through usage, and stress on the ‘roots’.

6.13.23 Development of new methods of teaching the language should be encouraged, and the possibility explored of including the study of Sanskrit in those courses (such as modern Indian languages, ancient Indian history, Indology and Indian philosophy), where such knowledge would be useful for an understanding of the subject is useful.

6.13.24 In addition, it would be useful for schools which have the capacity to do so, to offer foreign languages such as German, French, Russian or Arabic at the secondary or senior secondary stages. Every new language provides fresh perspectives and opens new prospects for the learner. However, these should be entirely left to the interest of students to take new languages either for special personal reasons or out of general inclinations.

6.13.25 The Committee recommends that the medium of instruction up to Class V must be the mother tongue or regional language.

6.13.26 The Three Language Formula (TLF) has been a part of the Education Policy of the country right from 1968 and continued through 1986/92. The Committee learnt during its interactions that the Three Language Formula has not been uniformly implemented in many states. With the passage of time the states have responded to local aspirations and preferences voiced by parents who would like their children to possess language communication skills that can facilitate intra-state, intra-regional as well as global mobility. Keeping this in mind, the Committee recommends that as long as the states ensure that the mother tongue or the regional language forms the basis of primary education up to Class V (a fact underscored by the earlier two policies) the choice of the second (at primary level) and third language (at secondary level) should be left to individual states to decide. 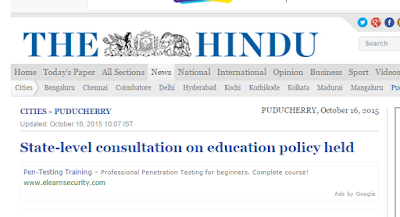 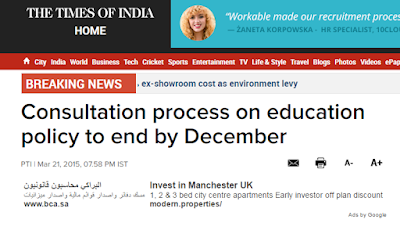