In search of the truth – Part II

The second claim of Mr Narain’s is on the Foreign Direct Investments.

I have used the tabulation provided by my learned friend only.

As per his duality theory of convenience, my learned friend has used the % growth to add value to his comment.

At the same time, the p-sec intellects of the country blame Modi for bringing FDIs at the same time praised the other chief ministers for the same FDIs in their states, a good approach indeed.

No doubt it is an impressive growth, but still Bihar has a long way to travel to catch up with other developed states. By sheer size Gujarat is 50% more than Bihar.

Also we need to understand that it becomes much tougher to retain your position once you grow beyond a point.

But what my learned friend has missed is how much % of claim shall we give to BJP for the development of Bihar, as they were the major coalition partners to Mr Nitish Kumar?

Or as usual, shall we give all credits to the new found darling and put all blames on BJP? The choice is yours! 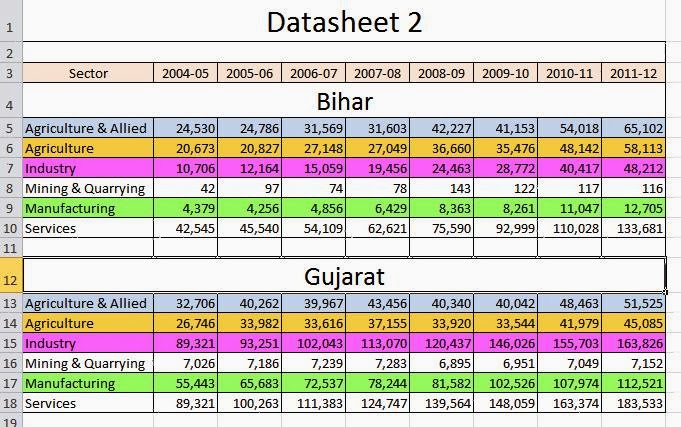 We should congratulate and motivate Bihar for a fine work of growing, we can benchmark Bihar against Gujarat but is it fair to compare the two ?

Look at the figures given by my frien on Industry, Manufacturing and services and decide yourself.
Now the most important point of % of people below the poverty line

Can we now declare Bihar has not achieved anything in improving the standard of living of its people and comment that Tamilnadu lags behind Gujarat in eradicating poverty?

Using this data, shall we proclaim that Tamilnadu has not cared for his agriculturists?

Sorry, I do not believe in jumping into such conclusions, if we really care for the nation and its people, we should come forward to meaningful discussions and not try to use our intellects to twist the facts and figures.

May serenity prevails all over; let us try to understand the big picture without any preconceived notions.

There have been hundreds of meaningful question my friend could have raised, but unfortunately he has not looked the data in a critical views. As a trainer, I think that now I should prepare a training program of " The Art of Questioning".

One think what surprises me is even people who claim themselves to be highly educated, never taken the pain of reading a post, understand and discuss it, rather they simply hit the like button, share it and praises the author.

Beware my friends, a community which can not think on his feel will time and again fell on the floor.

Let me thank my good friend, but for his postings I might not have taken pain to search for the data and write such a long posting.

PS : This may not be the end of the series, it all depends upon my friends's claims and counter claims.

In search of Truth

My good friend Narin has started a debate in Face book and thrown a lot of data and trying to prove that the Modi factor is just a myth. I am not sure whether I can use the word debate here; because what he is trying to prove is his preconceived notion that the Modi factor is just an inflated balloon and taking the pain of puncturing it with his arguments.

This is my attempt to analyse what Mr. Narain has told and try to find out the truth behind the statements.

Before politics and data crunching, let us have a bit of Physics.

In quantum theory it is said that the light travels as waves as well as particles of energy and one cannot exactly fix up the velocity and the position at the same time. This is known as Heisenberg theory of Uncertainty. Refusing this Albert Einstein has made a famous comment “God does not play dice with universe”.

I believe that, the correct way is to compare apples to apples and oranges to oranges and not apples to oranges. Fortunately, I am not such an intellect who can twist the facts to suit my own convenience.

Before we actually go into the posting, let me make something very clear.

1.   I whole heatedly bow down to the unsung, unheard common people of India who have made all achievement possible. By their sheer dedication, devotion, determination and call of duty is moving the wheel of economy of this nation and big salute to them.

2.   No way, I am trying to degrade the developments of any state by comparing it with another, and I wish and pray that all states should flourish and all my county men and women should have a comfortable and peaceful life.

3.    Most importantly, I have no requirement of keeping the flag of Gujarat high and degrading my own state of Tamilnadu.

Mr Narain has started with the power supply situation of Gujarat. His arguments were

1.   1. The claim of 24 hours of uninterrupted power supply is nothing but a lie.

2.   2.Gujarat has a weekly power /shutdown one day in every week for industries.

4.    4. So Gujarat government forces the agriculturist to use electricity for irrigation purposes in the night only.

5.    5. Gujarat has different cables to deliver high tension current and low tension currents, which is a high cost affair, which was rejected by the central controlling authorities.

6.     6. Out of one crore and twenty one lacs plus households, more than eleven lacs of household do not have electricity.

7.    7. When people of the state do not afford, power what is the fun in selling powers to other states.

Now let us look into these questions, and try to find out the answers.

1.   1. Unfortunately for the first question, there was no data provided by him, except for loud talks. My question of the duration of power supply or power shut down was not answered. The current state of affair of Tamilnadu, in electricity situation, the lesser said is better.

3.    3. We all know the relationship between demand and supply and if one is able to use it to his advantage, then we need to learn from him, nothing more nothing less.

4.     4.Usage of power to irrigate agricultural fields was also answered by people from the same field. Then explained that the evaporation of water during the day time will be more than of the evening and night time and even Tamilnadu Agriculture Department advices the farmers to irrigate the fields in the night time only. As usual no answers from my learned friend.

5.    5. Different feeders for low tension and high tension cables, was also countered by the same electrical engineer with technical data. No answers as usual.

6.     To draw this conclusion, he has used the Union Government’s data. Good work, but what he has informed is half truths. The real data looks like this

If we look at the data of Bihar, more than one crore and fifty eight lacs houses do not have electricity.

Now you can calculate which number is on the high side and take your decision.

But please do not put the blame on this performance on the heads of BJP which was a major coalition partner in Bihar for a long period with Mr Nithish Kumar.

The following data shows the number of houses has no lighting at all.

Fantastic job done by all three states. Kudos to all.

Just for information, this list gives you an idea of houses that uses Solar as the main energy source. Seems we have a long way to go in non conventional energy sources.

Watch this space for some more interesting info.